Malaysia has very beautiful island resorts that deserve to be promoted.
Not many people, for example, knew that the Hong Kong-Chinese movie, “Love You You” was shot on the Summer Bay Lang Tengah Island Resort.

Malaysia has very beautiful island resorts that deserve to be promoted.
Not many people, for example, knew that the Hong Kong-Chinese movie, “Love You You” was shot on the Summer Bay Lang Tengah Island Resort.

For several years, we have returned to this beautiful part of the East Coast off Terengganu, which is well-known for its islands such as Redang, Pulau Kapas, Pulau Perhentian and Lang Tengah, especially after experiencing the magnificent marine park.

We stayed at Lang Tengah some eight years ago. The clear sea water was simply inviting for anyone to jump into the sea but I especially loved it when we could see the colourful marine fish coming to us the moment we threw some bread into the water.

That had given me a longing desire to return to this part of the world, so we decided to return. In fact, Redang and Perhentian here are among the three islands besides Tioman which are highly recommended by ExpatsGo.

We were there last year at Redang Bay Resort; but this last trip which was just a week ago for four days / three nights was the best so far, as my wife managed to get a room at a very attractive subsidized rate at The Taaras Beach and Spa Resort, Redang. It is worth checking out their package.

The resort is definitely worth another visit, if we get the chance, to explore further its facilities and, of course, to laze around on its private beach overlooking a most spectacular bay. It is simply mesmerising.

In fact, The Taaras is one place that I would highly recommend to mother-and-son, 42-year-old Cheng Chau Yang and her eight-year-old son who are currently stranded in Shanghai over a questionable court’s travel ban preventing them from leaving China.

I have been advising the family, and hopefully with the help of foreign minister, Anifah Aman, they will soon return to their homeland by end of September.

At The Taaras, I also met a middle-aged couple who had stayed at the resort on a number of occasions. Pointing to a beautiful boat docked near the beach, they told me that’s they have just sailed in all the way from France. Never mind the sun, it was smiles all over on their faces.

Swimming with the turtles.
This time around, the biggest satisfaction was to go out on island hopping, where we were brought to a special spot, where the kids got a chance to swim with the turtles.

Swimming with the turtles.
This time around, the biggest satisfaction was to go out on island hopping, where we were brought to a special spot, where the kids got a chance to swim with the turtles.

On previous excursions, we did enjoy the marine park, but on this particular island hopping, for the first time we were introduced to the friendly turtles; for this, I would recommend this operator Asmadi Redang (+60 13-928 5002/016-9215002).

The only downside is that they did not bring us to the Marine Park, but on further discussion with Asmadi while writing this article, he agrees that locals would like to at least be able to say they have spent some time at the Marine Park and he would include Marine Park for all his trips. Foreign tourists, he added, are more interested in the quiet locations.

According to the boat skipper, Jojo was the first of the turtles to become very tame; soon, the others also followed along. Over here in Terengganu, apart from the giant leatherback sea turtle which is also known to locals as Penyu Belimbing found mainly in Rantau Abang, there are also the other three marine turtles namely the Green, Hawksbill, and Olive ridley turtles.

With that, we have four out of a total of seven marine turtle species in the world! Snorkelling and swimming with the turtles is both educational and fun for the kids as they learn that sea creatures and humans can co-exist and enjoy each other’s presence when they could touch the turtles when going on snorkelling.

The ones that we saw on this trip were the green turtles which are also known to islanders as penyu Agar, penyu Pulau or penyu Hitam. Its scientific name is Chelonia mydas. 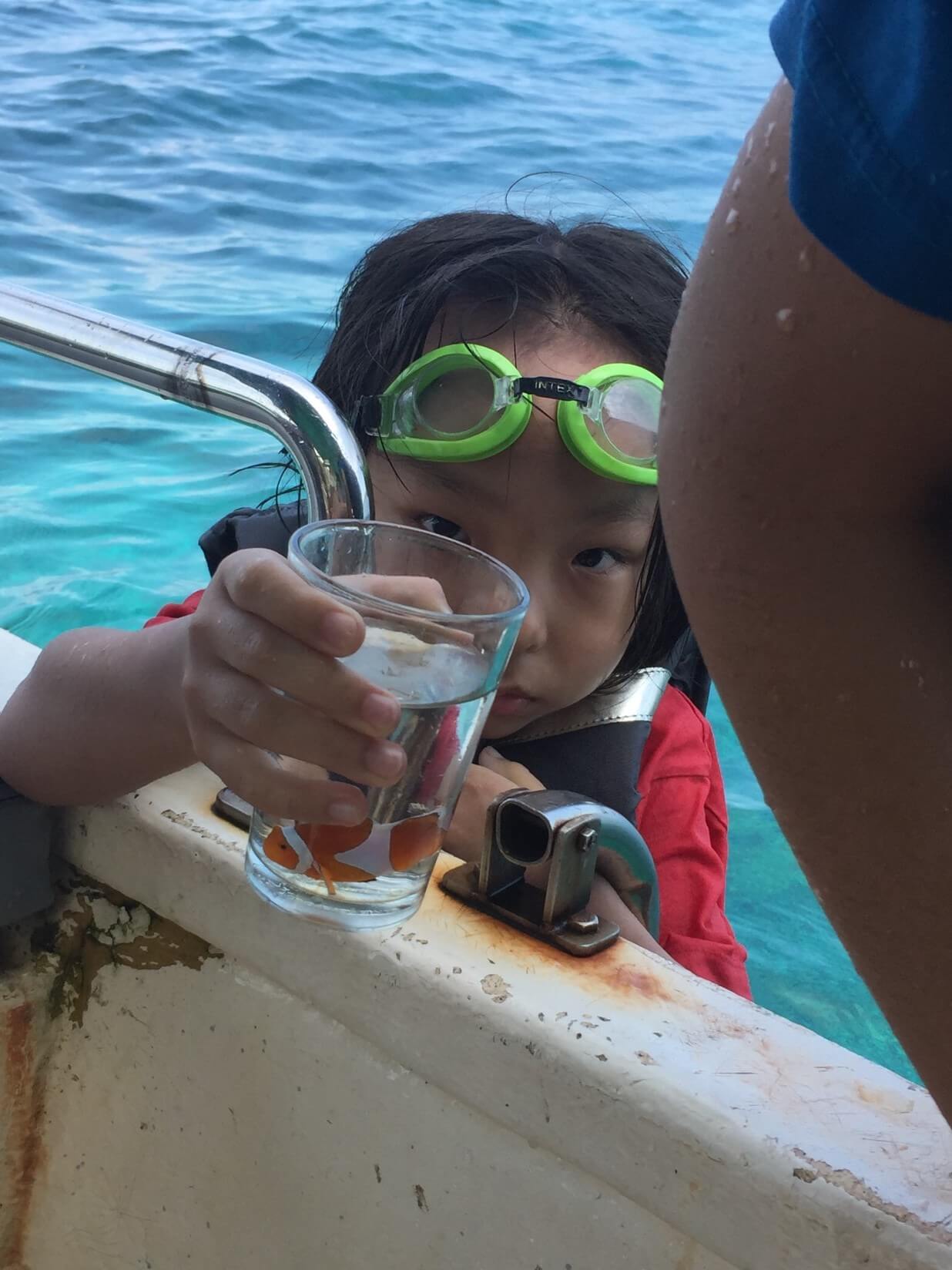 The skipper even caught a nemo to show them, but thankfully, the nemo was allowed to return to its habitat after some nice photography session with the kids. Guests also get to touch the sea cucumber if they ask for it.

Something to look out for are the baby sharks near to the Long Beach. According to a reviewer on TripAdvisor, if you stay at Redang Reef Resort, you can even snorkel basically anywhere near the beach. “You can just walk a bit towards the sea and you will see fishes and marine life immediately. We got the chance to see baby sharks.” See the other reviews here.

Because they provide safety jackets, even children as young as five or six years old can learn to float in water with some supervision by their parents.

The marine fish here are colourful and really beautiful and children would be fascinated when they see the sea creatures in real life. Yes, nothing beats the real thing, not even the Walt Disney’s Nemo.

On hindsight, I should have let my kids watch the movie again before the trip to Redang in order to fire up their imagination. It is a great opportunity to teach them to love the environment.

There are several jetties here in Kuala Terengganu
depending on which resort you are living in but the two more common ones are Shahbandar and Merang.

There are several jetties here in Kuala Terengganu
depending on which resort you are living in but the two more common ones are Shahbandar and Merang.

Shahbandar Jetty is just about a kilometre away from the express bus station and to get there, you can use either Uber, Grab or the normal taxis (which you do have to negotiate the prices with the taxi drivers).

Merang jetty is closer to Redang but it is 40 minutes away from the Kuala Terengganu on the road, but I would not recommend using private speed boat during the end of the year when the current is strong. It is also doubtful that they have public insurance since these are mainly private speed boats.

It is important to book the ferry tickets first to avoid any disappointments especially during peak seasons. The one that we booked the tickets for this recent trip is Sejahtera Ferry Services Sdn Bhd where we find the seats more comfortable and it is licensed and come with public insurance. You can contact them at 016-416-8800 (Mr.Yap) or email them at [email protected] with cost RM55 for adults and RM30 for children.

is an ordinary citizen with an avid interest in writing about interesting tourist spots and places to eat.