All things bright and beautiful,
All creatures great and small,
All things wise and wonderful,
The Lord God made them all.

What she didn’t say was that while God may maketh, man can certainly taketh away.

Last month, Malaysia lost its last male Sumatran rhinoceros. For the country, the loss had more far-reaching implications. Sumatran rhinos have been extinct in the Malaysian wild since 2015 and Tam’s death all but sealed the coffin shut on any hope of resurrecting the species here.

While Tam’s demise may have been at the hands of time — the old guy suffered from age-related complications — hundreds of Sumatran rhinos before him were denied so kind an end. Instead, they died at the hands of men, who poached them and destroyed their forest homes.

What makes this worse is that Tam’s isn’t first species in Malaysia to go not so gently into that good night.

While it took decades, maybe longer, for us to kill off our rhinos, it took far less time to annihilate an entire microsnail population – the beautiful jewel of the hills, Plectostoma sciaphilum. The entire species was wiped out when their home, a single limestone hill in Bukit Panching, Pahang, was quarried in the early 2000s.  And along Peninsular Malaysia’s eastern coastline, one of the largest turtle species, the leatherback sea turtle – Terengganu’s icon – has been declared functionally extinct.

These are just some of the species we know about (Between The Lineshas been unable to track down a single authoritative list of extinct Malaysian species). But what is painfully clear, from jungles to hilltops to seas, is that similar stories are playing out at a worrying rate. According to WWF-Malaysia, 14% of Malaysia’s mammals are listed by the International Union for Conservation of Nature (IUCN) as endangered in some way.

From the massive to the minuscule, extinction does not discriminate. Some animals at risk, like the Tenggek braided snail, the Indochinese leopard, the southern river terrapin, and the bent-toed gecko, hover in the shadows of our consciousness, understudied and barely understood.

Others, like the Asian elephant and its subspecies the Borneo pygmy elephant, the sun bear, the orangutan, the Malayan tapir, the dugong and the Indo-Pacific humpback dolphin have long been symbols of Malaysia’s biodiversity and poster animals for our tourism campaigns. But none of them are as significant to the Malaysian identity, and none are perhaps more at risk, than the Malayan tiger. 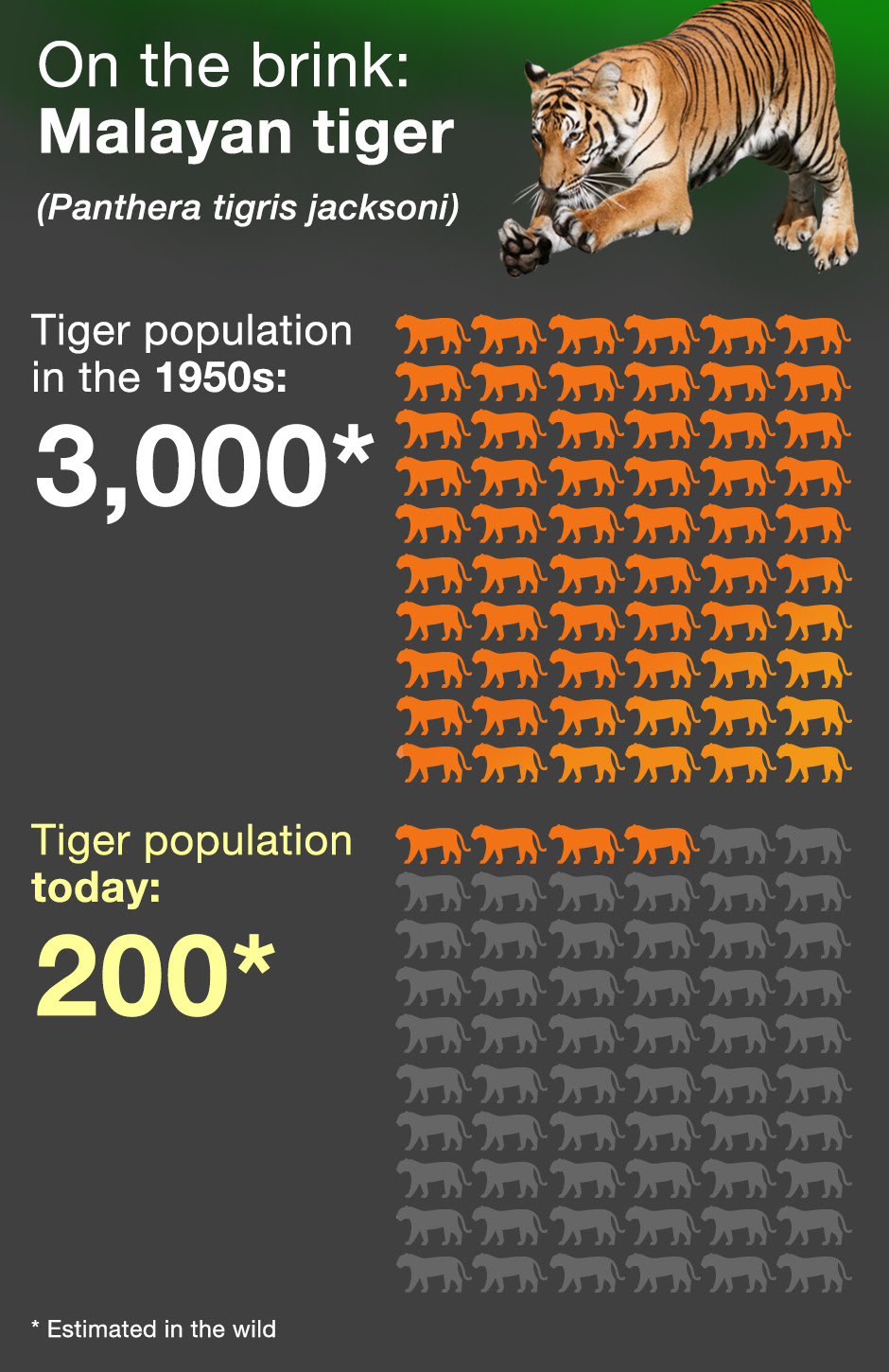 A symbol of bravery and strength, the majestic Malayan tiger adorns our national crest. Every smash by Lee Chong Wei and volley by Nicol David was done with the tiger’s stripes on their backs. As they sought glory on the pitch, our national football team adopted the moniker Harimau Malaya. The Malayan tiger is Malaysia’s spirit animal, if you will.

But now we stand to lose them forever. Mistaken for the Indochinese tiger until DNA tests in 2004 identified them as a unique subspecies of their own, their numbers have already plunged a staggering 93% since the 1950s. Now, only 200 Malayan tigers remain in Peninsular Malaysia.

If nothing is done, in just five to 10 years the only place we could discover this master predator would be in our history books.

Since humans became a factor, global species extinction rates have increased by up to 1,000 times. And although many reasons can be given to explain the depletion and extinction of our fauna, it’s safe to say humans are behind many of them. 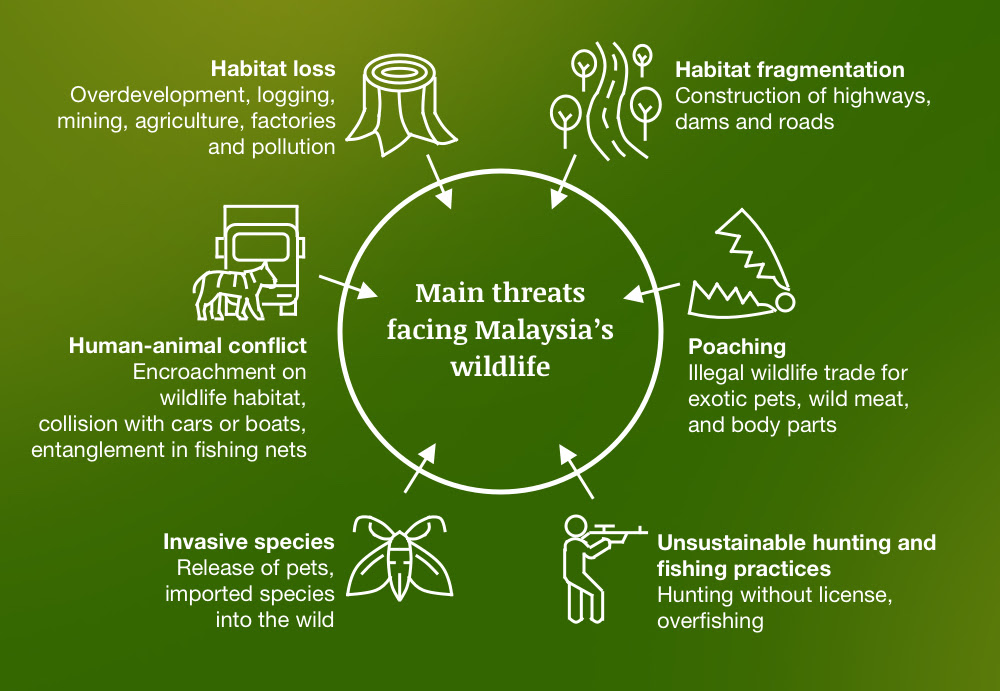 While species fight for survival all over the world, the steps Malaysia takes to right its wrongs are what will set it apart from other countries. But change will have to involve everyone. Across the country, government agencies, NGOs and conservationists are grouping together, to propose and carry out action plans to save countless species. Initiatives such as the Wildlife and National Parks Department ‘s (Perhilitan) ‘Save our Malaysian Tiger’ campaign is great proof of this.

“It’s not only on the shoulders of the department, but also on stakeholders, private companies, NGOs and the general public. The more cooperation and funding we get, the more initiatives the department can conduct to safeguard the wildlife we have,” Perhilitan director-general Abdul Kadir Abu Hashim tells Between the Lines.

Beside support and money, Malaysia also needs to give law enforcement more teeth. So, much-needed amendments are being made to the Wildlife Conservation Act 2010. But is it enough? Not entirely, says wildlife trade monitoring network Traffic. Its senior communications officer Elizabeth John says while the Wildlife Conservation Act is a “strong law”, “the same cannot be said for the wildlife laws of Sabah and Sarawak, which have some catching up to do.”

“Most of our marine parks were established around coral reefs and constitute a mere 2 nautical-mile boundary around islands. These either don’t cover marine mammal core habitats or part of their core habitat … This applies to other highly mobile marine endangered species such as turtles and whale sharks too.”

But Abdul Kadir says it’s not all doom and gloom. Social media has made the public more aware of conservation and he points to increased enforcement, the existence of the National Wildlife Forensics Lab, and the Intelligence and Tactical Centre for Wildlife Crime as among notable government initiatives.

Malaysia has also been taking steps to preserve its forests, which cover some 67.6% of the country. Although recent data is not available, a UN report noted that between 2010 and 2015, Malaysia recorded an increase in forest coverage area. Areas designated for biodiversity conservation rose 66% from 1990 to 2015.

Yes, Malaysia must develop if it’s to grow and keep pace with the rest of the world. But it shouldn’t happen at any cost. As WWF’s Living Planet Report 2018 points out, we cannot have human development and well-being without healthy natural systems. The truth is that we need animals as much as they need us.

But more importantly, what kind of Malaysians would we be if we let our precious wildlife; creatures great and small, whether they slither, run or crawl, die out under our noses?