Preserving our environment with “Grub Cycle” 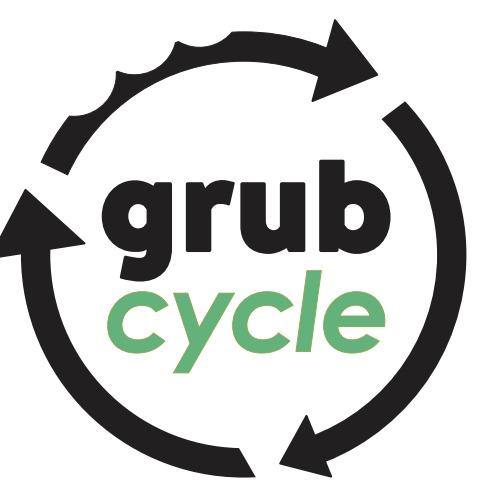 Redza Shahid (29) Co-founded Grub Cycle in June 2016. At first, Grub Cycle had 4 cofounders Asyraf, Hawanisa, Chacha and himself. The idea of starting up a social enterprise was first conceived when he was still doing his University studies. He realised that he needed to do more than what he was learning in the University so together with his friend they joined and volunteered in several charity organisations to help out orphanages and to paint houses. At that moment he was working at an investment company and the boss gave him an idea of how to start a social enterprise and fully encouraged him by submitting his name to a social enterprise programme then, organised by MaGIC in early 2015.

Due to this, Redza was given a KPI (Key Performance Index) to learn more about social enterprises such as the business
model, leaders of social enterprise, and other topics that are related to social enterprise. After one year, he was told to upgrade his position by deciding whether to join a social enterprise or to start on his own. In December 2016, Redza and the other 3 cofounders successfully raised up to RM 1 million grant and at that time there were a few investors that wanted to invest in their social enterprise.

Grub Cycle has 3 stakeholders that play crucial roles, the Co-founders, Investors and Consumers. The main purposes of Grub Cycle are, firstly, to reduce food waste in Malaysia while the other companies are focusing more on food composting. Redza believed that rather sending the food for composting, the edible food should be sold at a lower price. Secondly is to reduce daily expenses for their consumers, in fact, the grocery price had increased by 25% since 2010 but, the average salary in Malaysia has only increased by 20% within the same period. Lastly, Redza’s personal reason was a hope of attraction and encouragement towards other potential social entrepreneurs by involving himself in the social entrepreneurial industry. 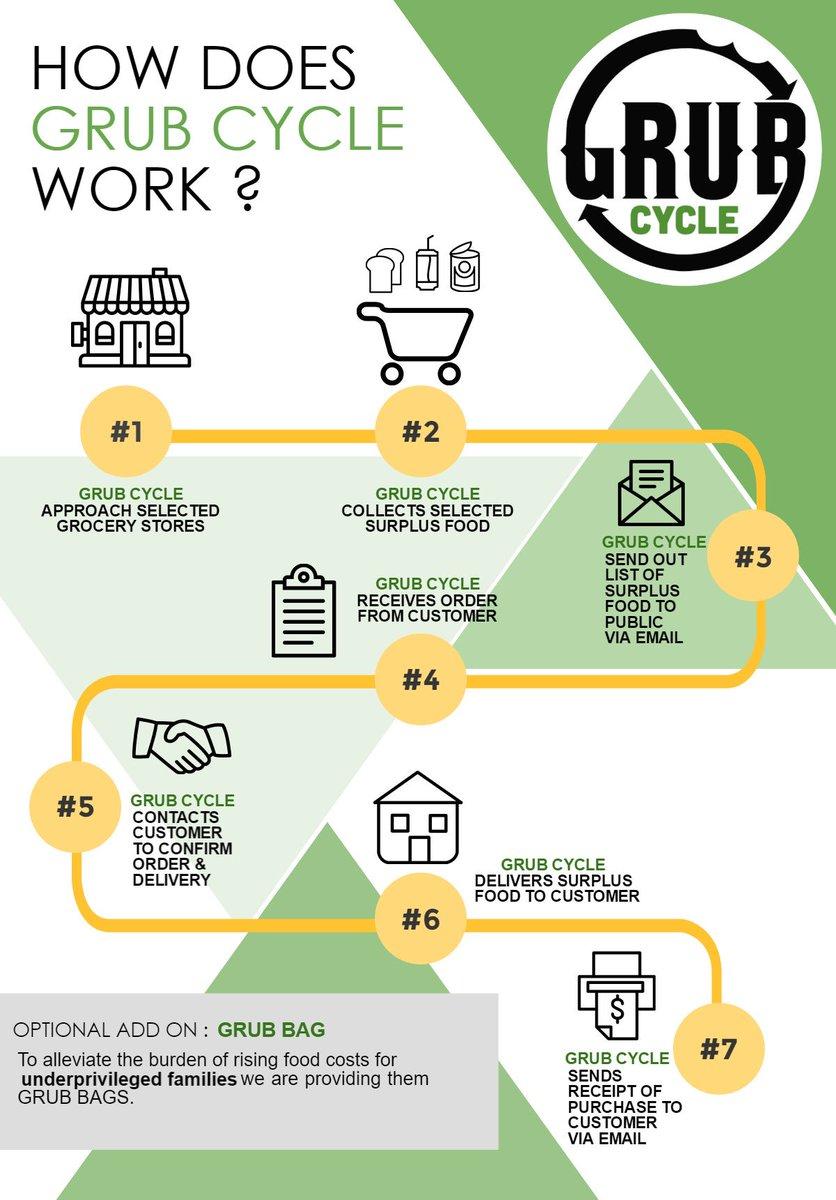 Since Grub Cycle launched back in 2016, it has emphasized its focus on reducing food wastage and ensuring that the low-income community can spend less money on food. So the question is what has been done in order to bring this idea to life. Below are some of the Grub Cycle offers to the public and how they can reach out directly to their customers and community.

A survey was conducted and it was discovered that there is an increased amount of food waste from local supermarkets and about 15,000 tonnes daily wastes from these supermarkets. 3,000 tonnes out of the 15,000 tonnes will still be edible and 10% is from groceries and supermarkets. This is because 30% – 50% of the products that are shown on the shelves in the supermarket are being thrown away. Grub Cycle obtains surplus food products from their partner supermarkets at an affordable price. These products are either 1 – 3 months from the expiring date. However, these products will be fully ensured and validated for their edibility. Grub Cycle will then sell these items from the website, mobile app or any other means convenient to their customers and delivered to them at no delivery cost.

Grub Mobile
This is like a mobile kiosk but in form of a food truck. It will be visiting low-income community areas 3 hours a day selling surplus food directly to the low-income community. However, If the customers are technology literate, they are able to order and buy online.

Grub Homemade
With this Grub Homemade, Grub Cycle improvises by turning surplus fruits or vegetables that might have been deemed rejected by the supermarket or that is not into a farm-to-table product. Examples include cabbage kimchi, pineapple jam, apple cinnamon and chili chutney. Grub Cycle in-house Chef-In Residence meticulously develops recipes based on high-quality food commodities that would otherwise go to the bin. Don’t worry: they are not recycling expired goods.

Grub Bag
Grub bag is one of the ways the Grub Cycle gives back to the community by subsidizing low-income families’ food essentials. It comprises of rice, cooking oil, sugar, salt and eggs. Grub Cycle delivers Grub Bag to the families on a monthly basis with the hope to lessen the burden of the families in need & empower their economy! But this model is rarely.

On launching the social enterprise, there are three main objectives that have been driving Grub Cycle daily to maximum productivity. Measuring their social impact performance could be done easily by comparing the KPI (Key Performance Index) of these main objectives. These objectives can be considered in a way that Grub Cycle has been contributing heavily to the socioeconomic needs of the society.

Reduce Food Waste
Edible surplus food from grocery stores and cafes are being prevented from wastage daily, considering that 30% – 50% of the prod 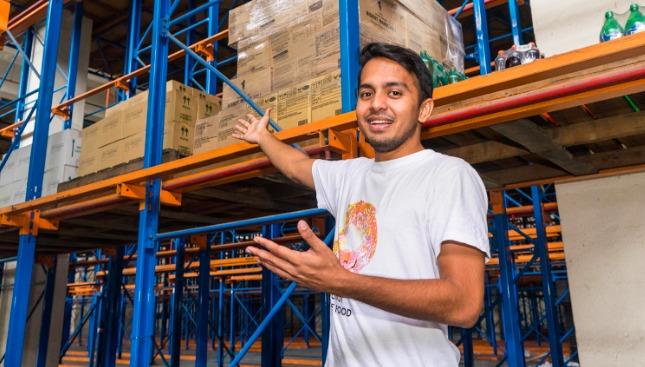 ucts that are shown on the shelves in supermarkets are being thrown away based on the survey. Grub Cycle buys these surplus edible products from the grocery stores at a lower price which encourages the grocery store to still make money out of what was meant to be wasted. Lastly, Grub Cycle will sell these products to their customers below market price.

Another way Grub Cycle has been preventing wastage of food is by collecting the fruits or vegetables that had been deemed unsellable due to their shape for instance. They are then turned into a farm-to-table product. This is through Grub Homemade model.

With all that Grub Cycle has done and measuring their social impact performance to prevent food wastage, Grub Cycle has also managed to save 2201 kg of food from being wasted and this number is still increasing.

Save Money
Foodies will get the satisfaction of their money’s worth with every inexpensive purchase. To reduce daily expenses for customers, as a matter of fact, the grocery price has been increased by 25% since 2010 but the average salary in Malaysia has only increased by 20% within the same period based on a survey by Grub Cycle through an interview. With this issue at hand, the low-income community is unable to make ends meet when it comes to buying food or grocery products. But with the Grub Grocery and Grub Mobile, all those low-income community areas are able to have direct access to a below market price surplus food.

Help Others
Grub Cycle Co-founder has taken pride in himself to be someone who really cares about the less privileged community and he constantly encourages other entrepreneurs to also contribute to the community positively. So Grub Cycle encourages everyone to become an agent of change in their respective community. This can be done by buying from Grub Cycle because with each item sold, a percentage of Grub Cycle’s profit will benefit the underprivileged. Till date according to the Grub Cycle website as at the writing of this article, 250 Grub Bags had been delivered.

GRUB CYCLE ACHIEVEMENTS
Food waste is one of the biggest concern of the world. In fact, by 2050, the world needs to produce at least 50% extra food to feed 9 billion people. While 25% of crop yield may be decreased because of climate change. Moreover, most of the food
manufacturing companies, municipalities, supermarkets, restaurants, and the federal government start applying practices and critical strategies for decreasing food waste[1].

Take Malaysia, for instance, food waste is a huge problem. Based on the SWCorp Malaysia, a government agency which deals with solid waste stated that they generate 38,000 tonnes of waste per day and around 50% of the solid waste is food waste. Moreover, out of 50% of solid waste, 60% of waste that going to landfill is still edible which in fact, that could have fed 2,000,000 people. SWCorp has also stated that food waste can increase up to 50% during the festival season.  There have been many movements to combat the food wastage in Malaysia. There are groups trying to recycle the food that is unsaleable at supermarkets. One of them is the Grub Cycle[2].

Grub Cycle is a part of the global movement to combat and decrease food waste and to save the environment. There is a creative way that was used by people from all over the world to combat food waste such as creative marketing incentive that celebrates “ugly” fruits and vegetables. Grub Cycle itself has launched a Grub Mobile which is the first mobile kiosk and it is located in Bukit Lanchong.

According to Grub Cycle website, they have contributed towards saving approximately 2,201 kg of food, saving the consumer expenses of around RM 20,958 with 250 Grub Bags delivered. This proves us that the Grub Cycle model is really working and the effects have also made impacts on people such as, firstly reducing waste by saving edible surplus food from cafes and grocery stores from being thrown away. Secondly, is saving money which foodies will get their satisfaction with their money’s worth with every inexpensive purchase.

In the future, Redza hopes that there are other social enterprises with the same passion and mission as similar to Grub Cycle to combat food waste. This will enable us to work side by side and cut down on the food waste in Malaysia. Redza believes that there are not enough social entrepreneurs to bring about positive changes to the community and environment. If there are enough social enterprises contributing to the same mission similar to Grub Cycle, food waste in Malaysia will cut down to the maximum level.

WHAT TO EXPECT IN THE FUTURE FROM GRUB CYCLE?

Grub Cycle is planning on having their own physical grocery supermarket here in Malaysia as a start before the end of this year 2018. With this kind of push, it can change perspectives on food wastage and bring positivity towards the idea of preventing food wastage. It will also be easier for the low-income community to purchase their grocery products at a lower price. Grub Cycle is also looking forward to expanding within the South East Asian Countries like Singapore for a start.

For more information on Grub Cycle feel free to visit our website and view our various products www.grubcycle.my